In 1992, the New England Chapter celebrated it’s 10th Anniversary with a member’s exhibit. The year denotes ten years since the chapter’s first exhibit and not when the chapter formed, which was 1980. This exhibit certainly continues in the chapter’s mission to celebrate and support a diverse group of book workers in all levels of skill.

The membership and community continued to grow from a handful of members in 1980 to one-hundred in 1992. Today we have nearly two-hundred steady members.

This post is a continuation of our A Look Back series, which is part of our celebration of 40 years as a chapter. I asked two exhibitors to speak about their work and their place in the bookbinding community at the time.

James Reid-Cunningham
My interest in bookbinding began with a fascination for design binding, the unique artistic bindings reflective of the contents of the book. I took a major detour into conservation because it is a lot easier to make a living repairing books than in creating artistic bindings. But throughout my career, I continued to create artistic bindings and book art. It has been fascinating to revisit the bindings I entered into the NEGBW 10th Anniversary exhibition.

They are among the first artistic bindings that I was willing to display publicly. I am struck by how different they are from the bindings I now create, but also how similar.

Around the Day in Eighty Worlds is one of my favorite books by one of my favorite authors, Julio Cortazar. The title is a pun on the Jules Verne novel Around the World in Eighty Days. I exhibited this binding a second time in A Dedication to Craft: North Bennet Street School @ 125 at the Concord Art Museum in Concord, MA, in 2009-2010. While the exhibition was being installed, the curator called me and hemmed and hawed for a while before blurting out that I had the title wrong on the spine. He was expecting Jules Verne and not Julio Cortazar.

Done in a traditional laced in structure with double core silk endbands and a top edge decorated with graphite, it was bound in full black goatskin with circular collages of paper, photographs, and wood veneer. This is my first artistic binding incorporating materials other than leather and gold. Looking at the binding again, I fear that the central panel on the upper cover has faded a little. I don’t remember the background looking so white. The gold titling looks better than I remember, but it uses a typeface that I now dislike and haven’t used since. Maybe it was the only typeface I had at the time.

The enclosure is a silk clamshell box with an interior box displaying the binding, with tin lithographic globes on brass rods suspended around the binding. The design concept of both book and box is a simple one: worlds upon worlds, hence the circles and globes, each a world in itself. Around the Day in Eighty Worlds features collaged images, but images never feature in my later work. Over the last twenty years, my designs have become increasingly geometric, almost abstract, with strong colors, sharp edges, geometric shapes and straight lines. There is little to orient the viewer, little that is pictorial or recognizable. Sam Ellenport once told me that my bindings feature negative space, as though what isn’t there is as important as what is. Over time I find myself less and less able to explain my bindings or even to suggest the correspondences between the text and images that inform what appears on the binding.

I haven’t looked at this binding in years, and I’m not too disappointed.

My second binding in the exhibition, Hell, has a textblock of hell money, which is burned at some Asian funerals to ensure that the deceased has money to spend in the afterlife. Someone suggested to me that it is insulting to use hell money in this way, but I am under the impression that burning hell money at a funeral is more a cultural custom than a religious act. No sacrilege intended. Hell money comes in many variations of design, color and size, making it ideal as a book art material.

Hell was one of my first miniatures. Since then I’ve done dozens, but I can’t say I like miniatures. I’m attracted to the challenge of constructing a book that functions correctly in a small format. Binding a miniature is much more aggravating than a larger book, and because of the small size, every error looms large. Each time I finish a miniature I swear to myself that I’ll never do another, but somehow, over time, I come across an interesting textblock, or I have an inspiration. Suddenly I find myself struggling with another miniature binding.

In the catalog, Hell was photographed with the textblock open so a viewer can’t see the binding. Apparently, the photographer thought that the contents were more interesting than the binding. This was the first time one of my bindings was screwed up in a catalog, but not unfortunately the last. I’ve had books reproduced upside down or flipped, both victims of an artistic decision to not include titling. Hell is now in the collection of the Morgan Library and Museum.

Looking back at my bindings from thirty years ago is both pleasurable and agonizing. I’ve never been satisfied with any binding, but with the passage of time both look better than I remember.

Peter Verheyen
I first became aware of the New England Chapter of the Guild when a friend and colleague of mine, an NBSS grad who worked with me at Bill Minter’s in Chicago made the day trip to Ann Arbor to see 1989 NE Chapter exhibit. Robin had told numerous stories of her time at NBSS and working in Pioneer Valley with among others David Bourbeau and William Streeter, also introducing me to the work of Carol Blinn. A couple years later, I moved to New Haven to work at Yale and found that the “Hamptons” to the north were heaven on earth for a binder. Having apprenticed and studied in Germany/Switzerland 1984-97 I was steeped in the German tradition and found so much to love in New England.  The New England Chapter quickly became a wonderful “home” and resource.

In addition to the regular events in the Pioneer Valley, often at 1 Cottage Street, the Chapter’s exhibits were a wonderful opportunity to share my work more widely. Even though I was the Guild’s Exhibitions Chair at the time, I was still a relatively new exhibitor and only in my 4th post-apprentice year, working primarily as a conservator. These exhibitions provided a “safe” venue to share  my work, and draw inspiration from binders I looked up to. Often, I used these exhibits to explore new techniques as it was with this Danish millimeter binding.

As I didn’t have a stamping press in those days, nor access to one, I used my then pride, a laser printer, to print the label, and then recessed it into the board with a border on top the way we often did at Bill Minter’s when I worked there. Was a simple way to make a label stand out more. My sense of typography has evolved since then and there are things I would do differently, but that’s as it should be. We work with what we have… The text block from the Sea Pen Press and Papermill was one of the first fine press/artists I had purchased after getting to know the artists Suzanne Ferris and Neal Bonham at GBW Standards in Portland, also my first.

At this time, I had also begun my shift towards binding fine press, letterpress printed text blocks, rather than rebinding mass market trade books. If I was going to invest in quality materials, my ongoing professional and creative development, the least I could do was put my efforts into beautiful text blocks. So much the better if created by artists and colleagues I admired, something that was very easy in New England. The friendships and other connections I was able to make during my time in New England strengthened my still new foundation as a binder, and provided a sense of community that I would miss after leaving the area.

We hope that you can join us for the Boston opening reception of Open/Set, the first traveling show organized by the American Academy of Bookbinding. The exhibit showcases the art of fine design binding created by binders from all over the world. At the reception, we are proud to have four local exhibitors speak about their bindings.

If you are able to attend and we hope that you can, please send an RSVP to negbwprograms@gmail.com (can you turn this into a link). In attention to the beautiful bindings on display, we will have light refreshments for your enjoyment. 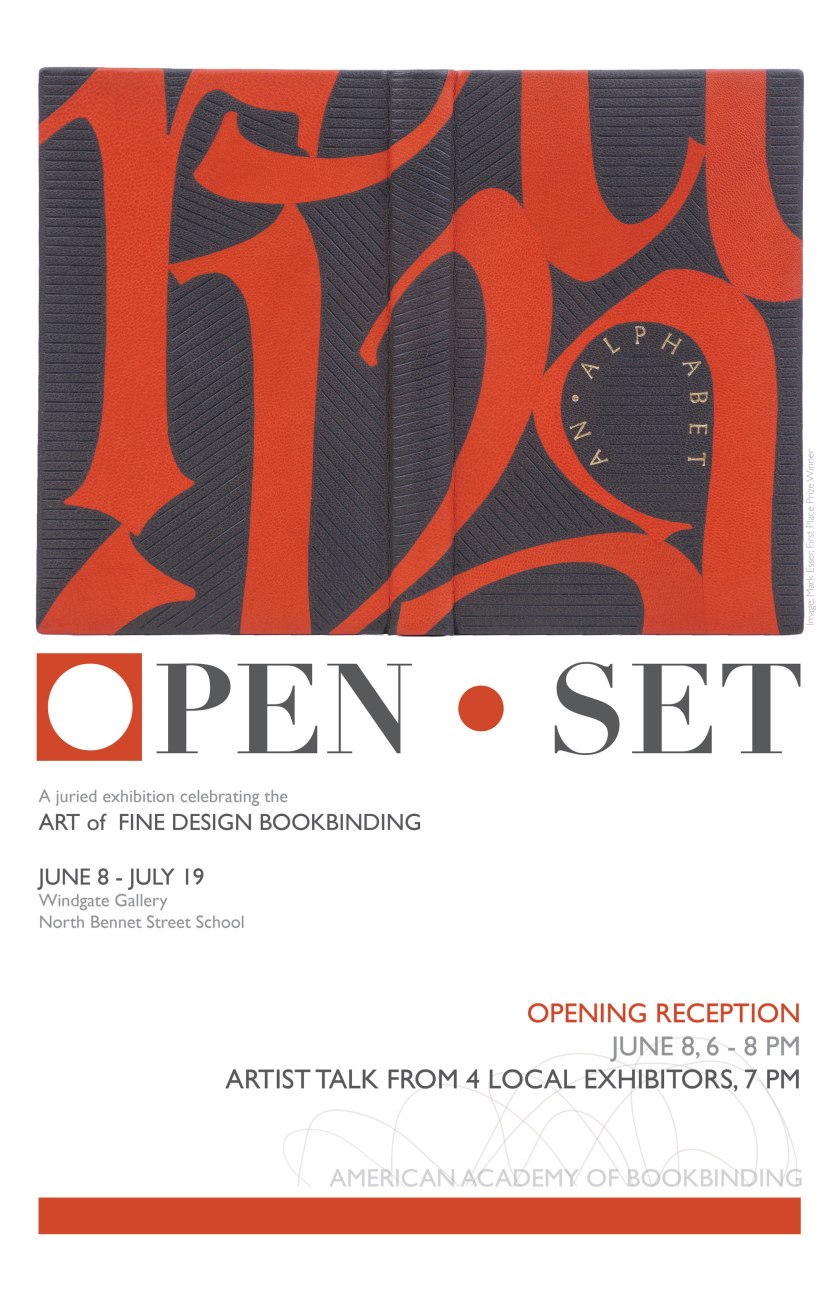 Two non-guild events that may be of interest to members:

Exhibition: January 30 – April 30, 2017
Bookbinding and the Pursuit of the Human Touch: The Work of Gray Parrot
curated by Britta Konau

Free and Open to the Public

Free and Open to the Public

Find us on Social Media: